Posted at 12:19h in Uncategorized by admin 0 Comments
0 Likes

At DBOOST DRINKS one of our goals is to raise awareness of the benefits of Vitamin D, hence making Vitamin D Deficiency a thing of the past. It was interesting to read in a CNN report that even children in ancient Rome had Vitamin D deficiency and studies show that far from being a new problem, furthermore Vitamin d deficency not only contributes to rickets – softening in of bones in extreme cases, but may increase a child’s vulnerability to other diseases. (Full link from CNN here: https://lnkd.in/gxXtjpE)

A new analysis of skeletons from ancient Roman cemeteries across Europe has revealed that vitamin D deficiency was a problem for children 2,000 years agoResearchers compared bones from ancient cemeteries spread from northern England to southern Spain, dating from the first to the sixth centuries, with those from Industrial Revolution-era cemeteries. They expected to see rickets, a condition caused by vitamin D deficiency, in children living during and after the Industrial Revolution because of pollution and cramped living situations in urban areas.But when the researchers studied 2,787 skeletons of children and adults in 18 Roman Empire cemeteries from northern England to southern Spain, they realized that a lack of vitamin D is a longstanding issue for Europeans.

One of the infant skeletons researchers studied. In England today, low vitamin D is found in 8% to 24% of children and one in five adults, according to the National Institute for Clinical Excellence. Researchers from McMaster University and Historic England and the English Heritage Trust, which looks after historic sites across England, published their findings in the American Journal of Physical Anthropology on Monday. Although the level of vitamin D deficiency wasn’t as severe as it became during the Industrial Revolution, more than one in 20 ancient children showed evidence of rickets. The majority of those skeletons were from children 3 years old and younger.Rickets is a condition in which children’s bones soften and weaken after a long, extreme vitamin D deficiency. It can increase a child’s vulnerability to other diseases, which could lead to early death. Of the skeletons studied, the prevalence of rickets in children was 5.7%. Residual rickets was found in 3.2% of adults. “Our study shows that vitamin D deficiency is far from being a new problem — even 2,000 years ago people, especially babies, were at risk,” said Simon Mays, study co-author and human skeletal biologist at Historic England, in a statement.

Considering that the Roman Empire included the Mediterranean, vitamin D deficiency may seem difficult to believe. But the analysis revealed that children in the northern parts of the Empire were more likely to have rickets. This area would receive weaker sunshine, which makes it harder for the body to absorb vitamin D, but the number of cases suggested that another factor was at play. The way parents cared for their children in colder conditions means they would have kept them inside more, away from direct sunlight. Vitamin D-deficient mothers could easily pass the same problem to their babies. “Being indoors away from sunshine was probably a key factor,” Mays said. “Infant care practices that were innocuous in a Mediterranean climate may have been enough to tip babies into vitamin D deficiency under cloudy northern skies.” 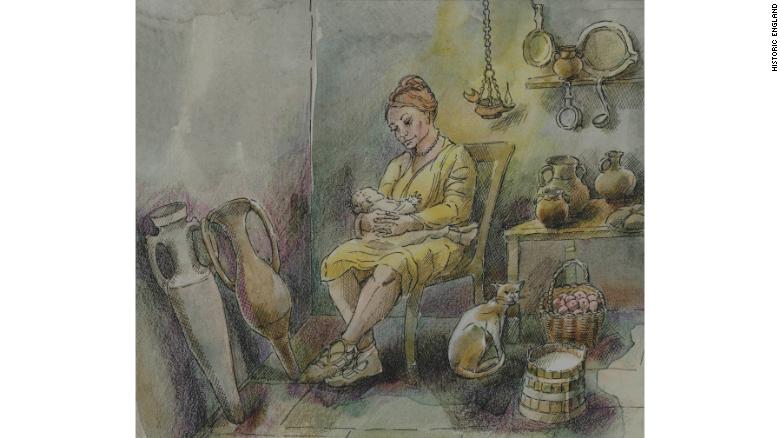 An illustration showing the living conditions of an ancient Roman mother and her infant. The analysis showed that vitamin D deficiency was not more common in towns than in the countryside, in sharp contrast to the Victorian age in England. But Roman towns were small, not bustling areas full of pollution. An exception to this was found in many of the skeletons in a cemetery near Ostia, Italy. At the time, Ostia would have been a port on the Tiber River due to its proximity to Rome. Due to the big population, its residents would have lived in multi-storied apartment buildings. The Roman Empire was the first widespread urbanization in Europe, the study noted. “Living in apartments with small windows, in blocks that were closely spaced around courtyards and narrow streets, may have meant that many children weren’t exposed to enough sunlight to prevent vitamin D deficiency,” said Megan Brickley, study co-author and principal project investigator from McMaster University, in a statement.

Cancel Reply
0
We use cookies to ensure that we give you the best experience on our website. If you continue to use this site we will assume that you are happy with it.OkPrivacy policy